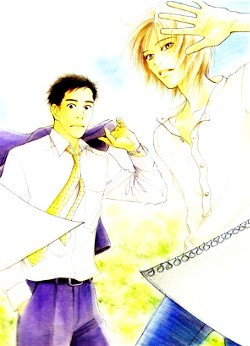 Kento Kumagaya, a straight-laced high school teacher, has had his heart set on having a loving family with a wife for a long time. However, when he proposes to his girlfriend Yukie, she harshly turns him down because he makes it sound like he only cares about her House Wife prospects. Broken-hearted, Kento accepts another man's offer of a consolation drink and later finds himself in bed with this man and having a hot one-night stand with him.

Kento is not sure what to make of this incident, but decides to put it out of his mind...until he happens to meet the very same man in his workplace. Turns out that this man, named Akira Kazuki, has been hired as his high school's substitute art teacher. A mortified Kento is convinced that he just wants for the night between him and Akira to be forgotten and his relationship with Yukie to be repaired, but as he and Akira get to know one another better, he begins having doubts about whether his dreams for life are really as immutable as he thinks. But even if he decides to pursue a relationship with Akira, is it really the kind of relationship that can last when it comes up against the typical issues and problems of real life?

Despite being only two volumes long, Future Lovers (published in Japan as two separately titled volumes, Mirai no Kioku and Kaze no Yukue) stands out as one of the better yaoi manga out there, presenting a relatively realistic and non-stereotypical homosexual relationship between likeable and three-dimensional characters, avoiding Loving Force and thoughtfully taking in account the stigma against homosexual relationships in Japan.