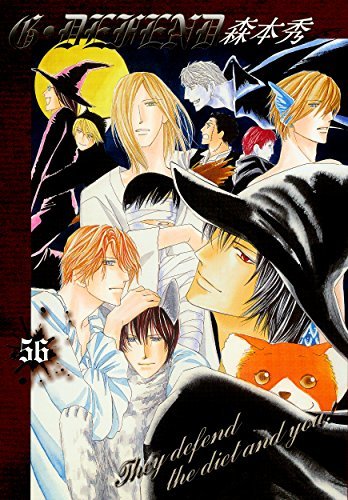 G Defend is a futuristic Boys' Love manga series created by Morimoto Shuu in 1993 that’s up to 61 volumes in Japan. The setting starts off in the year 2022, where Japan has become a high target for terrorism and crime. To combat the rise in terrorism, the Japanese Diet set up a facility called the Garrison, where they could train and house government agents tasked with defending Japan and defending Japan’s politicians. The Garrison is run by an Instructor, or ‘’Kyoukan’’, but because of the dangerous nature of the position seven Instructors had been murdered since the Garrison opened in 2014.

The eighth Instructor, Ishikawa Haruka, is loved by most of the Garrison and is a very capable leader. He has survived the longest of the other Instructors. One reason is because of his amazing leadership, and the second is his SP, Iwase Motohisa. Iwase is incredibly devoted to Ishikawa and vows to protect him from anything. He fulfills this promise by repeatedly risking his life to save Ishikawa. Ishikawa however is uncomfortable with another person risking themselves for his sake, and for the fact that he loves Iwase. Iwase though fully reciprocates his feelings, which is the driving force behind him protecting Ishikawa. But they have to be careful; the Garrison has a strict rule of no relationships between team members, and though other couples exist within the Garrison, Ishikawa knows they must be discreet in order to both keep their jobs and to maintain the safety of the Garrison.

Too bad many outer forces try to hamper everything Ishikawa has established.