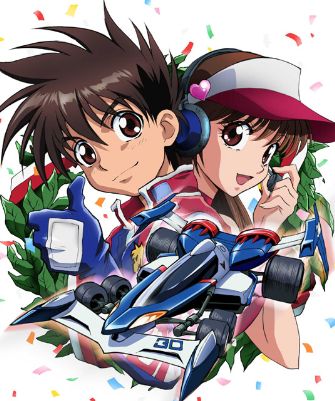 Hayato, Asuka and the Super Asurada 01
A computer-based navigation system race machine: the Cyber Formula. It has taken the place of F1 as the new race machine of the 21st century, bringing excitement to people all over the world.
—Opening Narration of the TV series
Advertisement:

Future GPX Cyber Formula is a 1991 anime TV series produced by Sunrise. It is an anime series about Formula racing in the future, a time when race cars are equipped with computer support systems called "Cyber Systems." The beginning of the series takes place in 2015, and continues on to 2022 in the OVAs.

The story focuses on a 14-year-old named Hayato Kazami, who one day becomes the driver of a car named Asurada. While on a delivery to the Fujioka track, the machine is attacked by thieves to try to steal the machine. He manages to escape and retrieves it to the Sugo team, but there's only one problem: Asurada is an AI supercomputer with a unique security feature equipped within a car, which is programmed to only one person per driver. Hayato's data is locked into the system, so the Sugo team has no choice but to make Hayato the main driver of the team. After obtaining the "Super License" to compete in the Grand Prix, he becomes the youngest racer in the history of Cyber Formula. Hayato now must struggle with being on top of his game and overcoming all obstacles both on and off the racetrack, while meeting rivals, friends and enemies along the way.

There are a number of drama CDs and games based on this series only in Japan, although the SNES game based on the TV anime was brought into the West as Cyber Spin, albeit with most of the references to the anime removed. SIN Vier, a Doujin Game based on SIN, has also made its way overseas through Steam.