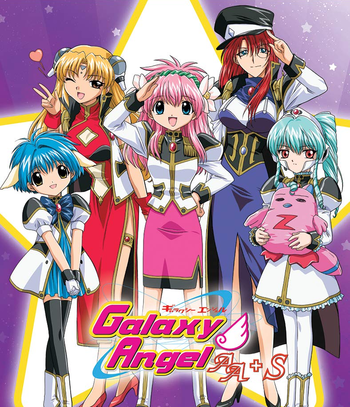 BROCCOLI had a problem. The first game in the Galaxy Angel gameverse was announced as an epic Dating Sim meets Real-Time Strategy game, to much applause and speculation. But as video games often are, Galaxy Angel: Project G.A. was delayed... and they still had an anime deal. A lesser franchise would have cut their losses and gone for the Adaptation Decay that was sure to follow; after all, they had little to no information, just the basic designs and personalities of the five beautiful, powerful and quirky Angels.

The anime producers, however, had another idea.

Madhouse was hired to make Galaxy Angel into a strange little Gag Series featuring a gang of cute but unusual women with jobs as a peacekeeping force in the galaxy. In place of honest Adaptation Decay, they outright parodied the concept, taking out all the characters but the Angels and fitting in new ones, exaggerating the Angels' personalities for comedic effect, and using the premise as an excuse to send them on strange 12-minute excursions.

Galaxy Angel followed an evolution much like many of Cartoon Network's Williams Street productions, gradually almost instantly abandoning continuity and going into more surreal episodic tangents. Although "Lost Technology" is commonly used as a comedic plot device, it is very difficult to predict any given episode, which can range from whole parodies to violent alternate realities. Ironically, this setup makes the show surprisingly accessible to the casual viewer.

Just about every single trope in this wiki gets spoofed at one time or another (yes, all of them). So the tropes listed below are the ones present in every episode or series to some degree or another.

The series was initially licensed in the U.S. by Bandai Entertainment, but the series eventually went out of print and then Bandai closed. Luckily, Nozomi Entertainment rescued the series and released it on Blu-ray in 2017 (and uploaded the first series to their official YouTube channel later that year). They re-released Galaxy Angel Z in 2018, and A in August 2019.

See the character sheet, and would you mind editing it? It desperately needs fans of the series to give it some love.