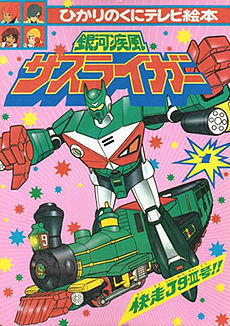 Galactic Whirlwind Sasuraiger (also translated: Sasuraiger, Galactic Gale Sasuraiger, and Wonder Six.) was an anime series aired from 1983 to 1984 in Japan with a total of 43 episodes. The series served as a sequel to the Baxinger anime series. The original concept is derived from Around the World in 80 Days.

Set in the year 2911, fifty planets have been discovered throughout the solar system and inhabited by humans. A gambler named I.C. Blues makes a bet with the boss of a criminal syndicate known as Bloody God that it is possible to navigate to all 50 planets within the space of one year. I.C. Blues and the JJ-9 team, made up of Rocky, Beat and Birdy, purchase a super robot capable of transforming into a train, the Sasuraiger, to accomplish the task ahead. The series follows the adventures of the group as they struggle to reach the gold and overcome the obstructive acts of the Bloody God syndicate that seeks to stop them from completing the goal.

The series had a line of toys under the name Bertrain in Japan and Fast Track in the Convertors toy line in the U.S. The series also was included in Super Robot Wars GC, along with fellow J9 robots Braiger and Baxinger.