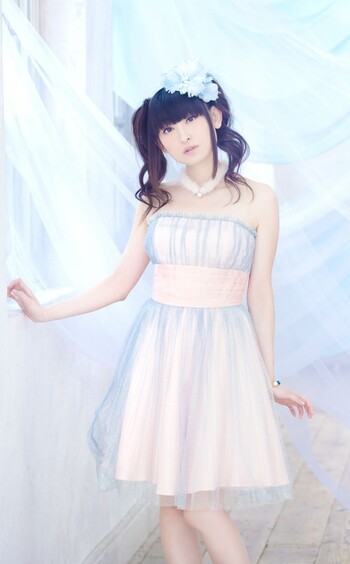 Currently and probably the most famous Japanese voice actor when it comes to... Token Mini-Moe characters. Yukari Tamura (born February 27, 1976 in Fukuoka Prefecture, Japan) is pretty much the one you will want to voice all those adorable, sweet, cheery little sisters out there... being able to kick ass is also a good bonus, and much better if she does it with magic. However, not only that, she also does just as well about older girls, that are sometimes impulsive in nature, a direct contrast to her subservient, adorable lolis. Creepy roles? She can do that when it comes to it too. She also has a tendency to voice Bokukkos (case in point: Sakura and Rika, and more recently Nui Harime). Her voice range is comparable to that of Cherami Leigh's.

Her Fan Nickname is Yukarin. She also joins Kikuko Inoue in her 'Refer Yourself As Eternally 17 Years Old' stitch.

Relationship Voice Actor to Yui Horie, which has led to the two temporarily forming a singing duo which has released a few singles. And surprisingly The Nobuyuki Hiyama, because to the Otakus around the world, their partnership is their fantasies come true!

Also has extensive experience in working with Mai Nakahara (Magical Girl Lyrical Nanoha StrikerS, CLANNAD, Higurashi: When They Cry, Myself ; Yourself, Godannar, My-HiME, My-Otome, Katanagatari, and Project × Zone 2; they also play a pair of twins in Seikon No Qwaser).

She and Nana Mizuki are both receiving the ultimate honor: their very own Nendoroid