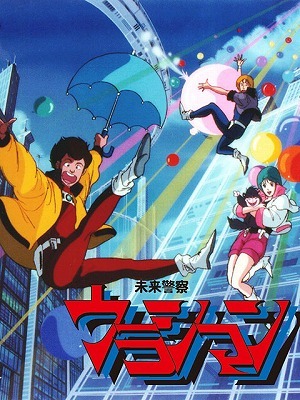 Future Police Urashiman (or Urashiman) is a science fiction Anime produced by Tatsunoko Production and released on the Fuji TV network in Japan and originally running between January 9th, 1983 and December 24th, 1983 with a total of 52 episodes. Later released in Germany, France, and Italy under various titles. The North American release plans from Saban Entertainment were canceled however, though the Anime received an English translation via fan subbing group Anime Classics.

The story follows a young man who is being pursued by police along with his cat when he finds himself caught in a cyclone that pulls him into a space/time rift, causing him to land in the year 2050. Having lost his memory, he finds himself pursued by the army-like criminal organization Necrime. Given the new name Ryuu Urashima, he joins the Neo Tokyo Mobile Police and battles Necrime with his partners Claude and Sophie.