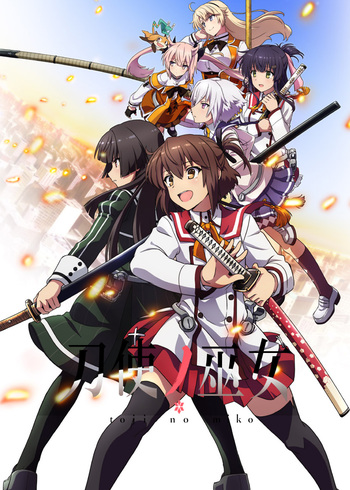 Cutest sword-fighters of all time.
Japan is constantly threatened by supernatural creatures called "aradama". To combat them, the government has authorized a special unit composed of sword-wielding shrine maidens called "Toji", who are trained in five special girl-only schools throughout the country. Kanami Etou and her friend Mai Yanase are chosen to represent their school in a sword-fighting tournament, in which the winner will be allowed to join the most elite of Toji.
Advertisement:

Katana Maidens (刀使ノ巫女, "Toji No Miko") is an original anime series produced by Studio Gokumi, premiering on January 5, 2018 and will run for two cours. A simuldub by Funimation has been confirmed. Crunchyroll is also streaming the show, which can be viewed here

worldwide outside of Asia.

On January 2019, a new television anime series Mini Toji will premiere following Super-Deformed versions of the characters from the anime in a Slice of Life format. Toji no Miko: Kizamishi Issen no Tomoshibi is a smartphone game.