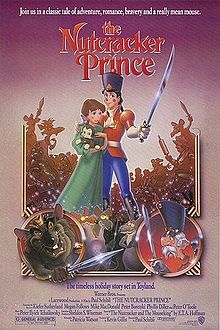 Join us in a classic tale of adventure, romance, bravery and a really mean mouse.
Advertisement:

The Nutcracker Prince is a 1990 Animated Musical made by Lacewood Productions and released by Warner Bros. Family Entertainment. Based on the E. T. A. Hoffmann's classic book The Nutcracker and the Mouse King and with music composed by Pyotr Ilyich Tchaikovsky, this animated holiday tale utilizes the vocal talents of such stars as Kiefer Sutherland (in the title role), Peter O'Toole, and Phyllis Diller. The film was produced by Kevin Gillis, creator of The Raccoons. However, the initial box office failure of this film caused Raccoons to be canceled.

The Nutcracker Prince provides examples of: