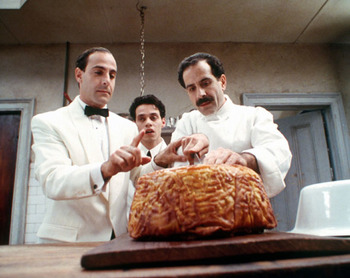 Primo: People should come just for the food.
Secondo: I know that, I know! (Beat) But they don't.
Advertisement:

In 1950s New Jersey, immigrant brothers Primo (Shalhoub) and Secondo (Tucci) own a small Italian restaurant, but locals prefer the blander fare offered by their competitor Pascal (Holm). Closure seems certain, so the brothers decide to host one last "big night," providing free food (and a celebrity appearance in the form of King of the Swingers himself, Louis Prima) in the hopes of raising their profile and saving the business.

Not to be confused with the 1951 Film Noir The Big Night.