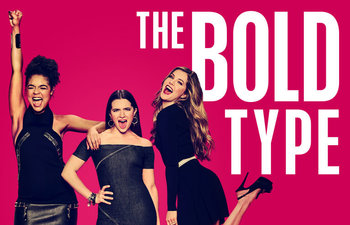 The Bold Type is a 2017 romantic work dramedy on Freeform.

Despite their outwardly confident personalities, they're each struggling with their own insecurities and personal issues: Jane's anxiety about her new position and impressing Scarlet's editor-in-chief Jaqueline (Melora Hardin), Kat coming to terms with her sexual orientation after meeting outspoken photographer Adena (Nikohl Boosheri), and Sutton's secret relationship with Scarlet board member and publishing lawyer Richard (Sam Page).

The Bold Type contains examples of the following tropes: