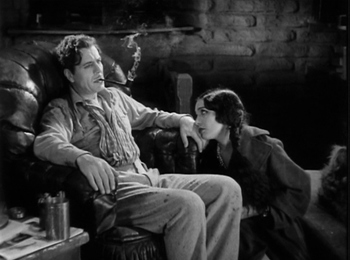 Capt. James Wingate (Warner Baxter) is a British army officer from a noble family. His cousin is Henry, Earl of Kernhill. James is in love with Henry's wife Diana (Eleanor Boardman). Henry, who is an all-around heel, gets into a pickle when he steals money from a charitable fund and loses it in a get-rich-quick scheme. Luckily for Henry though, James is an idiot, and he takes the blame for the missing funds in order to save Diana from social embarrassment. James leaves hurriedly for America.

James winds up in Arizona, where he has success as a cattle rancher. He's still depressed, however, mourning the loss of Diana. He is brought out of despondency when a local Native American woman named Naturlich (Lupe Velez) saves his life, and soon after saves it again (it's a long story). They fall in love and marry, despite the disapproval of the local townspeople, and have a son. But James's past catches up to him and threatens their happiness.

Last film in Hollywood for Eleanor Boardman, a star of the silent era (The Crowd, Souls for Sale) whose career fizzled out like so many other silent stars in the talkie era.