Literature / The Saga of the Faroe Islanders 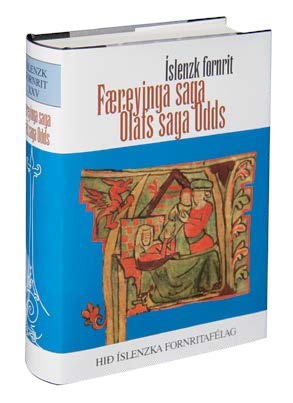 Hafgrim, chief over half of the Faroe Islands, gets the idea he could lead a much more fulfilling life if he was chief over the entire archipelago; which means that Brestir and Beinir, the brothers who hold the other half of the islands, have to die. Before Hafgrim makes his move, he secures the support of Thrand of Gotu, a wealthy farmer and cousin to Brestir and Beinir. Thrand is shocked at the suggestion he could ever participate in an assault on his own kinsmen, but not so shocked that a big heap of Hafgrim's money cannot heal the shock.

Advised by Thrand, the conspirators waylay and kill the brothers. Hafgrim has the courtesy of dying in the fray, leaving Thrand as the most powerful man in the islands.

Thrand's only remaining problem are Sigmund and Thorir, the boy sons of the brothers who have watched their fathers die. At first, Thrand wants to kill the boys, but he gets scrupulous and instead sells them as slaves to a merchant sailing to Russia. The merchant has a heart and sets the boys free in Norway. Sigmund and Thorir grow up in Norway, and having won the favour of the country's ruler, Jarl Hakon, Sigmund becomes a great warrior. Thirteen years after his fathers' death, Sigmund returns to the Faroe Islands at the head of a Norwegian host. Luck saves Thrand's life, but he has to submit to Sigmund in shame.

But Sigmund's fortunes change again when Norway is taken over by King Olaf Tryggvason. The new king tasks Sigmund with the mission to convert the Faroes to the newfangled foreign faith of Christianity. Outraged at this sacrilegious Norwegian arrogance, the good people of the Faroes turn away from Sigmund. Maybe the pious pagan Thrand will yet have the last laugh, after all.

The 1896 translation of Færeyinga saga can be read online here