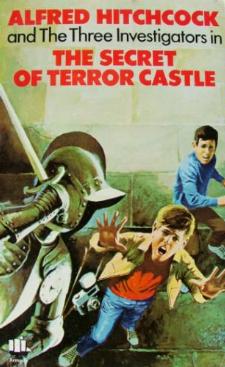 Jupiter Jones, First Investigator. Head of the firm and known for his remarkable powers of observation and deduction, he is stocky, muscular, and a bit roly-poly. He has a round face which often looks stupid but which hides a sharp intelligence. Jupiter has an excellent mind, and he is rather proud of it. He has many good features, but undue modesty is not one of them.

Pete Crenshaw, Second Investigator. Tall and muscular, sturdy and courageous, he excels at athletics. Inclined to nervousness before anything happens, but a tower of strength in any kind of trouble. He is Jupiter's right-hand man when it comes to trailing suspects and other dangerous activities. Pete's father is a special-effects man who works at one of the movie studios in Hollywood.

Bob Andrews, Records and Research. Slight of build, small but wiry. Studious in nature, he is something of a scholarly type with an adventurous spirit. He has great nerve and the courage of a lion. Adept at research, he works part-time at the local library which enables him to hunt up information needed for their investigations. Bob's father is a feature writer for a big newspaper in Los Angeles.

The boys spend their free time solving various mysteries rather than true crimes, mysteries which tended to be far more bizarre, unusual, complex, and intriguing than those of The Hardy Boys and other Kid Detective books of the day, and with protagonists who were simply ordinary, middle-class American boys, without the riches or special advantages of sleuths such as, again, The Hardy Boys or Nancy Drew, both of which had famous fathers who helped them out in their cases a great deal.

The three boys make an excellent team. Having formed the firm of The Three Investigators, they use their spare time to solve any riddles, enigmas and mysteries that come their way. Their motto is "We Investigate Anything". Headquarters for The Three Investigators is a damaged 30-foot mobile home trailer within the salvage yard run by Jupiter's Uncle Titus and Aunt Mathilda which has been cleverly hidden from view by stacks of junk which surround it. It is accessible only by several secret passages and hidden entrances including their favorite, Tunnel Two. Headquarters contains a small laboratory, a dark room, and an office with a desk, typewriter, telephone, tape recorder and reference books. All of their equipment was rebuilt from junk that came into the salvage yard.

For traveling long distances, the boys have the use of a gold-plated Rolls Royce, complete with a chauffeur, Worthington. Jupiter won the use of this auto, for thirty days, in a contest. (A grateful client from the seventh book in the series, The Mystery of the Fiery Eye, indefinitely extended the time that they could make use of the Rolls.) For local travel, the boys ride their bicycles or have one of the salvage yard helpers, Hans or Konrad, drive them in one of the trucks.

Adding to this quasi-realism was the real-life movie director, Alfred Hitchcock, who appeared in the original texts of the first thirty titles. His character provided the introductory and closing remarks in each book and, acting as a mentor, he was occasionally called upon by The Three Investigators during the course of solving a mystery. The real Alfred Hitchcock had little to do with the creation of these books: he was simply paid a handsome percentage for the use of his name and character. This provided brand-name recognition and helped boost sales of the books.

Following Robert Arthur's death, the writing of the series was taken over by several successive authors — two titles by Nick West (pseudonym of Kin Platt), three by Marc Brandel, and the bulk of them penned by William Arden (pseudonym of Dennis Lynds) and MV Carey.

The series is much more popular in Germany, where it has been published both as books and audio plays. Especially the audio plays have gained a very dedicated fandom, and most people who grew up in the 80s or 90s have listened to at least some episodes. This success has resulted in a whopping 162 additional episodes (so far) being produced just for the German market, compared to the 55 original ones. Two live-action movies, The Three Investigators and the Secret of Skeleton Island and The Three Investigators and the Secret of Terror Castle have also been made.

The Three Investigators provides examples of: