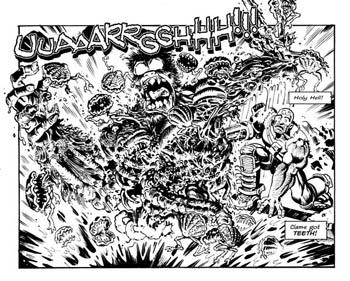 Weapon Brown versus Alley Oop
"I've got a lot of names, depending on who you ask. I'll let you call me Chuck. I kill for a living. There's a lot of guys in my line of work, and they're all cheaper than me. If all you want is to put a hole in somebody, you hire one of them. But if you want to take out a tank crew of battle-hardened scum and fall asleep knowing they died screaming — You call good ol' Weapon Brown."
— Chuck "Weapon" Brown
Advertisement:

It is years after the last war, and the world has ended.

The fighting, though, that still continues.

Surviving — no, thriving — in this world is "Weapon" Brown, a cybernetic mercenary with absolutely no pity and balls that could crack diamonds. Together with his man-eating dog Snoop, they eke out a living as a pair of mercenaries. If you want something done to someone, don't need any questions answered, and absolutely need to make sure the poor bastards suffer, you call Weapon Brown.

In other words, Weapon Brown is Peanuts, only set After the End and Grim Darker than Warhammer 40,000. Filled with great art and Shout Outs to just about every syndicated comic out there.

The comic started out as a side project to cartoonist, Jason Yungbluth's, comic, Deep Fried. The first Weapon Brown story was called A Peanut Scorned, and was originally included as a bonus in the printed versions of issues 1-4 of Deep Fried. It starts off by telling the origin story of Charles "Weapon" Brown, and sequences into his quest to save his red-haired girlfriend from his insane former friend, Linus van Pelt, who plans to use her in his attempt to finally summon The Great Pumpkin, all while he runs into other characters from the Peanuts universe.

Yungbluth would eventually shift gears, and made Weapon Brown his main focus. Having already used the characters from Peanuts, he decided to widen the scope, and include elements and characters from just about every newspaper strip out there, in order to make the bigger and more epic follow-up, Blockhead's War, which ran for five issues until 2013.

Yungbluth later released an omnibus, containing all the Weapon Brown comics stories, loads of extra material as well as a new story about the eternally grim hero.

In 2018, Yungbluth announced that he was in the process of developing a sequel, called Weapon Brown: Aftershock. The comic is to work as an epilogue of sorts to Blockhead's War, and will be structured as an anthology, with the Framing Device being a mysterious wasteland prophet telling three different tales about Weapon Brown around a campfire to an audience of townsfolk. Yungbluth himself will handle the frame story, while the three stories will be handled by three different artists. Yungbluth successfully funded the project through Kickstarter

. It is most certainly Not Safe for Work, with nudity, sex, and Gorn.