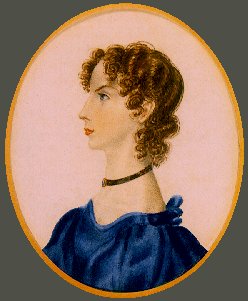 The one who wrote The Tenant of Wildfell Hall.

Anne Brontë (17 January 1820 – 28 May 1849) was the youngest of the three writing Brontë sisters, and the one who most people forget about. Charlotte Brontë wrote Jane Eyre (and some other books that get much less love); Emily Brontë wrote Wuthering Heights (and some much less melodramatic poetry); but Anne's books are the polar opposite of both. Bleaker than Charlotte (and, in fairness, Charlotte could get pretty bleak) and more prosaic than Emily, Anne's popularity has unfairly waned in comparison with her sisters'.

While being extremely close with her sister Emily (their friend once told that in childhood they were inseparable like twins), Anne seems to had a tense, while loving, relationship with Charlotte. In her letters, Charlotte complained about Anne's extreme reserve and after her death, she suppressed the republication of Anne's most famous novel, The Tenant of Wildfell Hall, believing it to be "too little consonant with the character... of the gentle, retiring inexperienced writer". Juliet Barker, in her biography of the Brontës, said that "Charlotte, it appears, was prepared to consign her sister’s novel to oblivion because she considered its subject at odds with her own perception of what Anne’s character was and ought to have been." Either way, it doesn't seem that Charlotte knew her youngest sister well - her saying that Anne "in her twenty eighth year... laid [her life] down as a burden" implies that Charlotte didn't even remember her age at death. Anne was actually 29 when she died.

Anne was the only one of the sisters capable of functioning in the real world, spending several lucrative (though unhappy) years as a governess. This real-world experience is reflected in her less melodramatic and far more realistic fiction. She wrote only two novels, under the name of Acton Bell (and a volume of poetry in collaboration with her sisters):

Anne died from tuberculosis at the age of 29. Despite having such a small list of works, her work was influential in English literature, making her a case of Short-Lived, Big Impact.