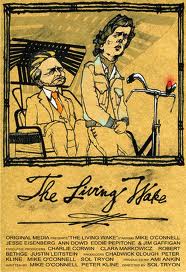 A man is only as good as his Living Wake.
Advertisement:

K. Roth Binew (O'Connell) is an eccentric, self-proclaimed genius who has recently found out that he only has until 7:30 that night to live. He recruits his best and only friend Mills (Eisenberg) to accompany him on his last day to live, in which they search for the true meaning of life in a "brief, but powerful monologue" that K. Roth's vanished father (Gaffigan) once promised to tell him, organize K. Roth's wake and invite everyone in town, and give K. Roth the most eventful last day he could ever have.

These tropes are dressed for death.