Film / Living 'til the End 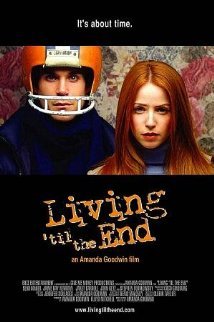 Living 'til the End is a 2005 romantic drama film written and directed by Amanda Goodwin, starring Sean Maher and Jaime Ray Newman.

Jack Whilton (Maher), an estate planner, learns from a psychic that he is to die on his next birthday, so he becomes an agoraphobic shut-in, determined to prevent his death. Then he meets Audrey (Newman), a young woman in his building who is dying and asks him to help plan her estate. Through his relationship with her, he begins to learn how to live again.

Living 'til the End contains examples of: