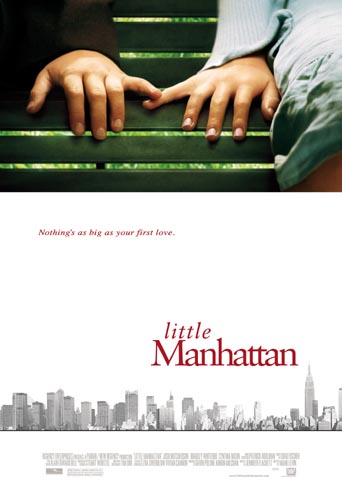 Small love in a big city, in the eyes of children.
Advertisement:

Little Manhattan is a 2005 romantic comedy written and directed by the husband-and-wife team of Mark Levin and Jennifer Flackett.

The movie depicts the story of ten-year-old Gabe's realization that girls can be pretty and pretty nice to be with. The story takes place, and was filmed on location, in Manhattan, mostly in the Upper West Side. The film stars Josh Hutcherson and Charlie Ray in the leading roles of the two children.

10-year-old Gabe (Josh Hutcherson) meets 11-year-old Rosemary Telesco (Charlie Ray), a girl he's known since kindergarten. But after being partnered with her for sparring, he suddenly notices her as a girl, not another face. To Gabe's elation, they begin spending time together and he is completely enamored with not only her, but her life.