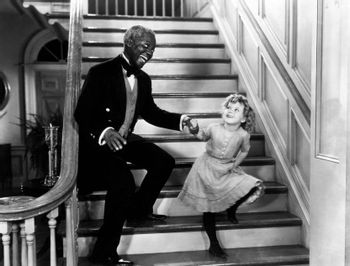 An opening Title Card reads, "Kentucky in the 70's". The 1870's, that is. The American Civil War is over, but not for Colonel Lloyd, played by Lionel Barrymore. His son died in the war and for that he can never forgive the North. Too bad for him that his daughter Elizabeth is in love with a Northerner named Jack Sherman. After the Colonel finds out about their relationship, Jack and Elizabeth elope together.

Six years later, Jack and Elizabeth are living on an outpost in The Wild West. They have an adorable little daughter, named Lloyd Sherman and played by guess who. For some cutesy reason, the Army is making little Lloyd into an honorary colonel. But now Jack is going further out west, which is "no place for women and children", so Elizabeth and Lloyd will be going back to Elizabeth's old hometown in Kentucky. With a couple new friends, Lloyd causes mischief in the Colonel's yard and he yells at her without realizing that she's his granddaughter. Oh, what will happen now? Will Lloyd's adorable charms eventually win over her crotchety grandfather and mend their divided family? Will Jack make his fortune out west or will he fall prey to a pair of wily swindlers? And how racist will Bill Robinson and Hattie McDaniel's characters be?

The movie is adapted from The Little Colonel, the first in a series of children's books written by Annie Fellows Johnston. The semi-autobiographical series was published between 1895 and 1912. The Little Colonel books are now in the Public Domain and available on Project Gutenberg