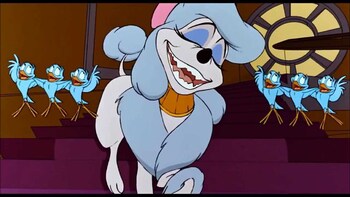 Something about stairs apparently makes people want to dance. Never mind the threat of stubbed toes, broken ankles, or tumbling all the way down them to the bottom, or the fact they don't really end up anywhere other than the stage rafters. When there's an opportunity to showcase the lead's dance skills, what better way to do it than with a dance number set on a staircase? And hey, some of those older staircases are gorgeous.

The musically inclined version of a Grand Staircase Entrance, and a more reserved kind of Busby Berkeley Number. Often a fixture of Spontaneous Choreography, especially in more "grounded" musicals. May include Chorus Girls.

Rubber Band sure makes a big show of its stair walking.

Rubber Band sure makes a big show of its stair walking.