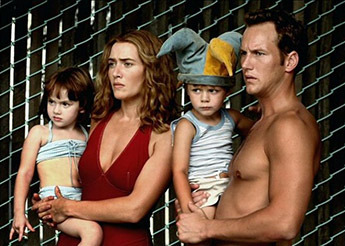 Little Children is a 2006 American drama film directed by Todd Field. It is based on the 2004 novel of the same name by Tom Perrotta, who along with Field wrote the screenplay. It stars Kate Winslet, Patrick Wilson, Jennifer Connelly, Jackie Earle Haley, Noah Emmerich, Gregg Edelman, Phyllis Somerville, and Will Lyman.

In suburban Boston, the lives of two lovelorn spouses from separate marriages, a registered sex offender, and a disgraced ex-police officer intersect as they struggle to resist their various vulnerabilities and temptations.