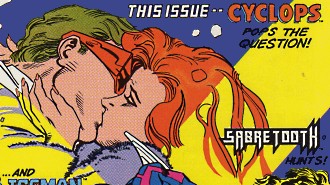 A trailer hook that exploits Shipping for all its worth, used mostly in children's shows. This is a much more merciful way to attract attention than Tonight, Someone Dies, though it usually falls victim to one of two problems with trailers:

Hey, Ain't No Rule that says you can't tease the shippers who haven't learned they should Never Trust a Trailer.

Compare Sweeps Week Lesbian Kiss, when a same-sex kiss is used as a ploy to boost ratings.