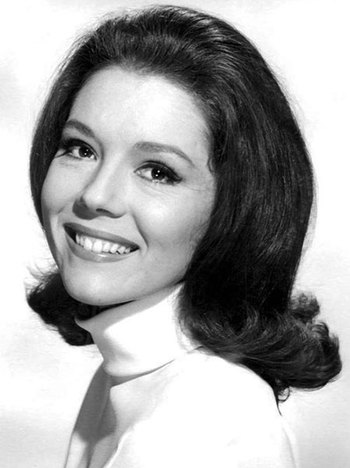 "An awful lot of actors shy away from the uglier aspects of the human condition. They want to be liked, which is a cop-out. You've got to go for it."
Advertisement:

Dame Enid Diana Elizabeth Rigg, DBE (20 July 1938 – 10 September 2020) was a classically-trained English actress who worked with Britain's Royal Shakespeare Company and National Theatre, as well as appearing on Broadway. She received the Tony Award for Medea, as well as an Emmy Award for playing Mrs. Danvers in a TV adaptation of Rebecca. She also played Hedda Gabler and Regan in King Lear, among many other parts. She was made CBE in 1988 and a Dame in 1994.

She was of course well known for her groundbreaking and iconic role as Emma Peel, the most famous female partner of British agent John Steed (Patrick Macnee) in the British TV series The Avengers, and for playing the only woman James Bond has ever married, Tracy di Vicenzo, in On Her Majesty's Secret Service. In keeping with that spirit, Rigg was the host of PBS' Mystery from 1989-2003. She also made a new mark in the 2010s by playing Lady Olenna Tyrell (aka "The Queen of Thorns") in Game of Thrones.

In other words, Diana went from helping to invent the Spy Catsuit trope by wearing it, to playing a seriously scary sort of Cool Old Lady. When Lady Olenna Tyrell boasts about her sexual charms when she was young, it's a fair bet that many viewers are remembering Emma Peel in leather. And one advantage of her acting skill was that she was able to play a formidable Deadpan Snarker at any and every age.

Her daughter, Rachael Stirling, is also an actress, with a prolific career on both stage and TV. The two of them appeared in Doctor Who, in an episode that was apparently written specifically for them.

Tropes & Trivia about her career: