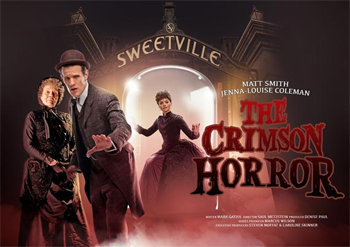 The one where the Doctor accidentally joins the Red Man Group.

There's something very odd about Mrs. Gillyflower's Sweetville mill, with its perfectly clean streets and beautiful people. There's something even stranger about the bodies washing up in the river, all bright red and waxy, with an expression of absolute horror on their faces. Madame Vastra, Jenny Flint and Strax are contacted by a dead gentleman's brother and decide to go up to Yorkshire to investigate.

Mrs. Gillyflower is recruiting people in the local church, where she shows the crowd her beautiful blind daughter Ada. The young woman was blinded and heavily scarred by Mrs. Gillyflower's husband, and in response, Mrs. Gillyflower decided to provide a safe haven for all those who want a better way of life. Sweetville mill only takes the best and the most beautiful. Jenny decides to infiltrate into the mill, where she finds the chained "monster" that Ada has come to love as her pet over the last few weeks... the Doctor, severely paralyzed by the crimson horror. His skin is dark red, his mouth is frozen wide open. His Bizarre Alien Biology allowed him to survive the process that killed many other "discarded" gentlemen and ladies, and Ada hid him from her mother as her own private pet. With what little motion he has left in his limbs, the Doctor manages to show Jenny how to restore him back to normal, and explains that Mrs. Gillyflower is running a scheme rather more sophisticated than a simple mill. Apparently, it involves a never-seen gentleman named "Mr. Sweet". Vastra, meanwhile, recognises the crimson horror from her own time period.

The Doctor and Clara were captured when he tried to take her to Victorian London and figure out a bit more about her mystery. The TARDIS landed them in Yorkshire instead, where they decided to investigate the crimson horror and were promptly captured while attempting to infiltrate. Once Clara is freed (to Jenny's great confusion — after all, she saw Clara die last time), the Doctor finds Ada and reveals himself to her as her "monster", before confronting Mrs. Gillyflower. The old woman reveals that she's got a prehistoric red leech — Mr. Sweet — stuck to her chest, and plans to spread its infection across the planet to kill all but her "best and most beautiful"... using brainwashed labour forced to build a Steampunk rocket. Ada is mortified to be betrayed by her mother, especially once the Doctor calls Mrs. Gillyflower out on being the cause of Ada's scars. While Vastra and Jenny neutralise the rocket, Mrs. Gillyflower is defeated by Strax and spends her final moments complimenting Ada on her ruthlessness. The Doctor proposes to take the leech back to its proper time period. Ada smashes it to bits with her cane instead.

In the aftermath, Clara takes a break to head home and spend some time with her replacement family. Angie and Artie, who know a good adventure when they see one, have done some internet research and found pictures of Clara across time — including one from Victorian London, instead of Yorkshire. Clara's confusion leads her to accidentally reveal her time-travelling secret to the kids, who insist on coming along.