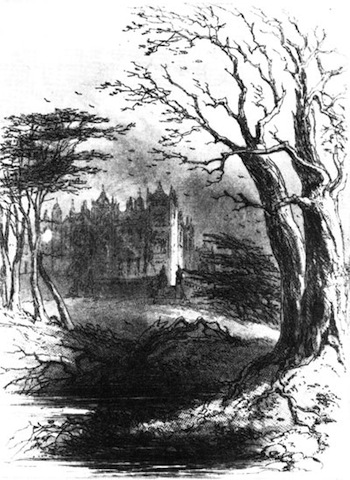 Bleak House is a major novel of Charles Dickens and was published as a serial between March 1852 and September 1853. Half recounted by the heroine, Esther Summerson, and half by an omniscient narrator, Bleak House is fairly complex, with many characters and sub-plots all tied together by a particular Chancery suit — that is, a civil suit dealing with equity rather than law. When the novel begins in London circa 1830, the suit in question, Jarndyce and Jarndyce, has continued for generations, lost all meaning, and become a labyrinthine amalgamation of red tape and legal costs.

Jarndyce and Jarndyce is, in fact, the linchpin and crux of the novel, being what ties its many characters and plots together. In particular, Esther Summerson, an orphan who becomes a ward of the present Mr. Jarndyce, narrates her own involvement with the parties of the suit and those connected to them, whilst the omniscient narrator tells the remainder. Aside from Esther herself and John Jarndyce, the suit pulls in his young relatives, Ada Clare and Richard Carstone; Sir Leicester Dedlock and his wife, Lady Honoria Dedlock; the Dedlocks’ lawyer, Mr. Tulkinghorn; a law-stationer by the name of Snagsby; a charitable, young, dark surgeon, and many, many more.

The novel helped support a judicial reform movement, which culminated in the legal reforms of the 1870s.

Bleak House has been adapted many times in drama, film, and music. The Death of Poor Joe (1901) is a short film and the oldest surviving one to feature a character from Dickens’s works. During the silent film period, Bleak House was filmed twice: first in 1920 and again in 1922. Another short film as recorded in 1928. BBC Radio 4 broadcast a radio adaptation in five hour-long instalments in 1988. The BBC has produced three television adaptations, all entitled Bleak House: the first aired in 1959, in eleven thirty minute episodes; the second, in 1985 aired in eight episodes and won three BAFTA awards and nominations; the last aired in 2005, ran in fifteen episodes, and won a Peabody Award for creating "appointment viewing," soap-style. The songs "Ada Clare" and "Farewell to the Old House" were inspired by the novel, as was Anthony Phillips' piece "Bleak House" which he released on Slides (1979).