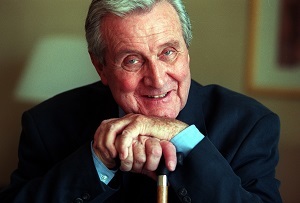 "I went to acting school, but only for nine months. If you're an actor, you know, don't really need to learn how to do it."
Advertisement:

He was best known for portraying the character that practically defined the Quintessential British Gentleman for television, secret agent John Steed in the 1960s series The Avengers, alongside Cathy Gale (Honor Blackman) then Emma Peel (Diana Rigg) then Tara King (Linda Thorson). He reprised the role in the 1970s revival series, The New Avengers.

He had an extensive career in TV productions such as Battlestar Galactica, and played quite a few supporting roles in movies such as The Howling and the James Bond film A View to a Kill.

He also had an unusual and interesting life, far from being that of a gent. From a rather eccentric family, he was raised by his mother and her (lesbian) partner. He was expelled from Eton for being the school bookie and pornography vendor. And during his time in the Navy in World War II, he was hospitalized with bronchitis shortly before D-Day. He later found out his torpedo boat was sunk with all hands, and he’d narrowly avoided death. His experiences in the war were the main reason he was adamant that Steed almost never use a gun. He took American citizenship in 1982. More details can be found in his autobiography, Blind in One Ear - The Avenger Returns.