Literature / Evil Under the Sun 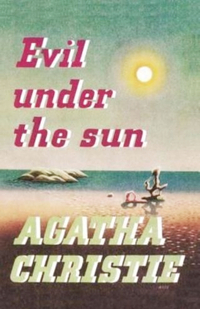 A novel by Agatha Christie published in 1941, featuring Hercule Poirot.

A quiet holiday at a secluded hotel in Devon is all that Hercule Poirot wants, but amongst his fellow guests is a beautiful and vain woman who, seemingly oblivious to her own husband, revels in the attention of another woman's husband. When she is found strangled by powerful hands, were those hands male?

The story has been adapted twice for the screen, firstly as a 1982 film directed by Guy Hamilton and starring Peter Ustinov with an all star cast (that included James Mason, Maggie Smith, Diana Rigg and Jane Birkin) and the music of Cole Porter, and secondly as a 2001 episode in the eighth series of Poirot starring David Suchet. It was also adapted into a 2007 PC video game.

The 1982 film adaptation has its own trope section, while tropes for the 2001 ITV adaptation are listed on the page for the TV series.

The 1941 novel provides examples of:

The 1982 film provides examples of:

Alternative Title(s): Evil Under The Sun