Series / Make It or Break It 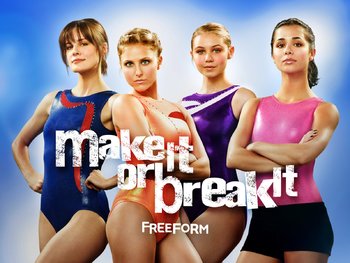 Make It Or Break It is a series that ran on ABC Family from 2009-2012. It follows the lives of a Four-Girl Ensemble of teenage female gymnasts training at The Rocky Mountain Training Club (known as "The Rock") in Boulder, Colorado in hopes of making the US Olympic team. The first season follow the girls in preparing for Nationals and the fallout afterwards. Season 2 focuses on preparations for Worlds and the Rock's conflicts with the National Gymnastics Organization. The third and final season follows the girls at USA Training Center, where they await selection for the 2012 Olympics.

The show was created by Holly Sorensen who, along with Paul Stupin and John Ziffren, served as the show's executive producers. The stunt doubles were former elite, Olympian or NCAA champion gymnasts.