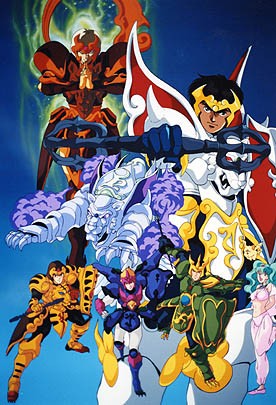 Legend of Heavenly Sphere Shurato (Tenkū Senki Shurato) is a 1987 manga by Hiroshi Kawamoto. It was adapted into an anime by Tatsunoko Production and released in 1989. Due to the character design and the fact that the characters use a full-body armor very similar to those of Saint Seiya, the comparison was quickly made and the show was often accused of being a knock-off of the latter. Shurato is still notable to this day for being one of the rare Anime to date (with 3×3 Eyes) to rely entirely on Hindu mythology instead of Japanese and Chinese myths.

Shurato Hidaka is a young martial arts champion about to compete for the title of Grand Champion of the Junior Tournament in Japan. Against him, his childhood best friend, Gai Kuroki who is also his greatest rival. As the final match is about to commence, a beam of light teleports them to an alternate reality known as Tenkuukai ("Heavenly World") where both discover they are the reincarnations of ancient spirits that are to protect the goddess Vishnu, along with her personal guard.

Shurato later dons a shakti, a holy armour with a lion-motif that he owns as the King Lion Shurato (Shura-Oh Shurato). However, Gai makes a quick Face–Heel Turn and goes serving the Asurah leader Indra who had the goddess petrified and framed Shurato and his fellow guardian Hyuga for the deed. Shurato has a hard time confronting Gai since his new persona is completely different from the man he used to know. From now on, Shurato will have to accomplish his destiny and prove his innocence as well as free Visnu from her stone prison, with the help of the three only guards who believe in his innocence (Hyuga, Ryoma and Reiga) and Lakshu, a spirit priestess who falls in love with him.