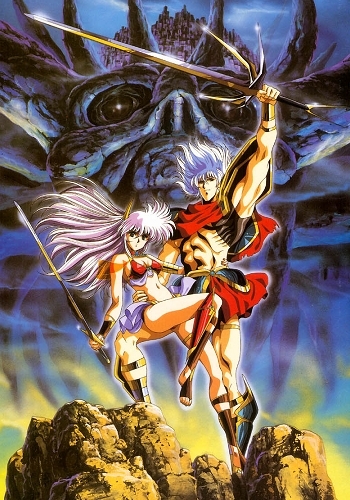 Legend of Lemnear (originally titled Wings of Absolute Darkness: Valquisas) is a 1989 Heroic Fantasy OVA produced by AIC. It was created by Satoshi Urushihara and Kinji Yoshimoto in their first collaboration.
Advertisement:

A young, silver-haired warrior girl named Lemnear is on a quest to avenge the murder of her parents and her entire hometown. While trying to find Gardin, the evil sorcerer who committed the deed, she discovers she is part of an ancient prophecy predicting the downfall of the supreme overlord Varohl, who has their world on his clutches. The young warrior will have to hack her way through (even) more evil sorcerers, slave harems, sinister dungeons and the mighty Castle of Valquisas in order to unveil the mystery and save the world.

The OVA had a manga adaptation by the same creators, though featuring a greatly different plot. It was published between 1991 and 1993.

The original OVA provides examples of: