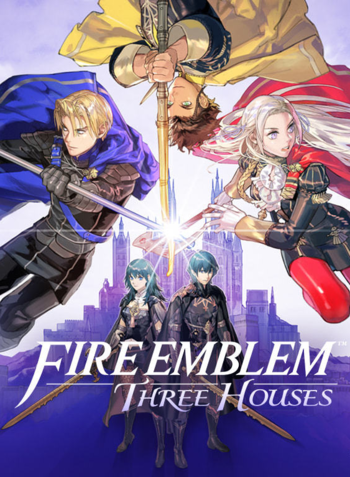 Three realms. Three houses. Your decision.note Clockwise from left: Dimitri Alexandre Blaiddyd, Claude von Riegan, Edelgard von Hresvelg and Byleth Eisner (Male and Female)
"Long ago, the divine Seiros received a revelation from the goddess. A gift, to help guide the lost. The goddess is always watching over Fódlan from her kingdom above. However, in ancient times, the goddess graced this world with her presence and offered salvation to the people here. She is the mother of all life, the arbiter of every soul."
— Archbishop Rhea
Advertisement:

Fire Emblem: Three Houses (Fire Emblem: Wind, Flower, Snow, Moon in Japan) is the sixteenth game of the Fire Emblem series of Strategy RPG games, co-developed by Intelligent Systems and Koei Tecmo Games and published by Nintendo for the Nintendo Switch on July 26, 2019.

Three Houses focuses on the continent of Fódlan, where the Church of Seiros has great influence over its people. The Player Character is a stoic young individual (named Byleth by default) who travels the land with their father as a mercenary. After helping three youths fend off a bandit attack, Byleth discovers a mysterious girl living within their mind named Sothis, who blesses them with the ability to rewind time. The youths, named Edelgard, Dimitri, and Claude, happen to be the heirs to the three nations of Fódlan and the leaders of the three student houses at the Church's Officers Academy at Garreg Mach Monastery. As a reward for their deeds, Byleth is encouraged to become the professor of one of the houses, just as a conspiracy to undermine the supremacy of the Church of Seiros begins to revive Fódlan's violent past.

The game features some major changes to the series' formula. Most of each in-game month before story-related battles is spent exploring the monastery to bond with allies and to complete quests, as well as teaching your students and raising whichever skills you deem fit for them. A new weapon type, gauntlets, are introduced, which allow for (relatively) weak but reliable multi-hit attacks. Additionally, each unit can be assigned to lead a battalion which can increase their stats and let them perform area-of-effect actions, such as disabling enemies' movement or supporting allies. The Weapon Triangle, a series staple, has been removed, although there are high-level abilities that emulate it. Byleth's power to turn back time during battle, on the other hand, was previously introduced as a gameplay mechanic in Fire Emblem Echoes: Shadows of Valentia.

The game's character design is the work of Chinatsu Kurahana, of Uta no Prince-sama fame.

Following the initial release of the game, an Expansion Pass added new content in waves. The first three releases added new units, battalions, side missions, and cosmetics. The fourth and final wave, released February 13, 2020, is a side story titled "Cindered Shadows" and explores a secret "fourth house" of students hidden beneath the monastery.

Byleth appears in Super Smash Bros. Ultimate as the fifth and final downloadable character of the first Fighter's Pass. Along with Byleth, Garreg Mach Monastery is included as a new stage in the game. A skin based on the game is also available in Tetris 99.

Example of:
Go Mad from the Revelation