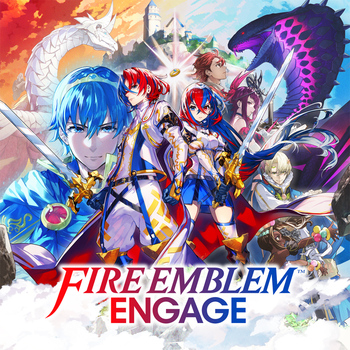 Become the Divine Dragon and save the continent of Elyos!
Advertisement:

Fire Emblem Engage is the seventeenth game of the Fire Emblem series of Strategy RPGs, developed by Intelligent Systems and published by Nintendo for the Nintendo Switch. It was released on January 20, 2023.

Engage is set on the continent of Elyos, home to four kingdoms. In the past, the kingdoms waged war against the Fell Dragon, and ultimately sealed him with the help of heroes from other worlds. However, a thousand years has since passed, and the seal is weakening. In the midst of all this, Alear, a Divine Dragon and main protagonist, awakens without their memories. Now Alear must recruit allies and seek out the Emblem Rings needed to call forth the otherworldly warriors once again.

, "Welcome to the Somniel" Trailer