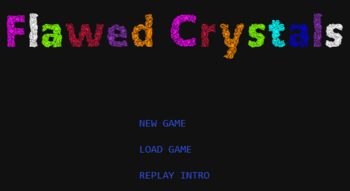 "Certain flaws are necessary for the whole. It would seem strange if old friends lacked certain quirks."
Advertisement:

Flawed Crystals is a Steven Universe text-based horror RPG fangame made by A Friendly Irin and Farla in Twine.

Set in an Alternate Universe where Rose Quartz actually shattered Pink Diamond, the Gems leave Steven behind to fight the Diamonds themselves. They succeed in shattering the Diamonds but return from the mission corrupted themselves; Steven and Connie now need to track them down, capture them, and figure out a way to restore them to their former selves.

The game is equal parts RPG and fanfiction, with the RPG-style dungeons balanced with character- and dialogue-focused healing scenes. Its major focus is on character study, with each gem's section exploring details of their history and personality that went unaddressed in the show itself.

. The game's build notes, as well as extensive commentary from both developer and artist about the inspiration and creation of the game, can be found here

. A short tie-in story called Dissonant Harmony, which tells the opening "cutscene" from the gems' perspective, can be read on both AO3