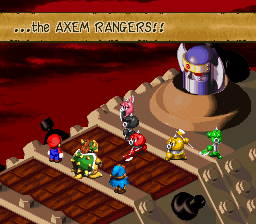 In a typical boss fight, the player fights a lone, powerful target (possibly accompanied by a few regular Mooks). The pattern here is usually straightforward; if there are mooks, take them out quickly to lower the enemy's attack strength, then finish off the big guy. If you're facing two bosses at the same time, it's a Dual Boss. Aside from the caveat of having to worry about two opponents, the strategy isn't too complex as long as you know what you're doing.
Advertisement:

A Wolfpack Boss is a bit trickier. In this case, the player faces three or more enemy characters who aren't quite powerful enough to be bosses when alone, but attack together to overwhelm the player with multiple powerful attacks and abilities. Wolfpack bosses tend to be strategically different from other boss battles because the player has to decide which one to attack first, and has to deal with being attacked multiple times per turn.

One thing that can work in the player's favor here, unlike a normal boss fight, is that the going may get easier as the enemies fall one by one. However, it can also work the other way around, where killing one enemy just makes the survivors get angry and fight harder.

This is what happens when the Quirky Miniboss Squad is Not So Harmless.

The Psycho Rangers are a common example of this. It may involve a Shared Life Meter. Compare Dual Boss, where you face two simultaneous threats that can be challenging individually. Contrast Duel Boss where the boss takes your character out of your group for one-on-one. For the non-boss version involving ordinary enemies, see Multi-Mook Melee. Conservation of Ninjutsu is related, especially if the enemies get stronger as they shrink in number. See also Doppelgänger Attack. Also known as "gank bosses" in some circles. Lastly, not to be confused with Lone Wolf Boss, but overlap is possible.