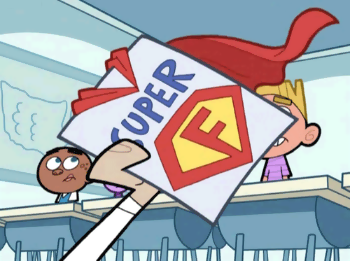 "Good news, Turner! You've taken F to a new level! I'm going to give you a Super F!"
"When he skated towards the roses at the roller rink
The judges held their noses and said, 'Stan, you stink.
You're so bad we've got to give you a sub-zero score.'
It added up to negative twenty-four."
— Square One TV, Less Than Zero
Advertisement:

The Book Dumb Bob just turned in his essay. It wasn't just regular bad; it was the Plan 9 from Outer Space of high school essays. It was so bad that it somehow broke literature. Obviously, the regular grading scale is not extreme enough for Bob's horrifying essay, so Bob's teacher pegs his work with a grade completely off the scale: an F--.

In the United States and some of Western Europe, an F is the lowest grade possible. There are no additions to it, not a plus or minus. F simply means failure, no matter how bad. However, this is not always the case in the world of fiction. Sometimes, the only way to really show how badly the student performed is to add something special to the F and let the rest take care of itself. This also means that the trope name indicates a performance so bad, that not even the nonexistent grade of F- is bad enough for it.

This trope is for negative grades that go off the scale, from a simple F- all the way down to Z-. Or if grades are percentage-based, the percentage will be negative, meaning that the character got more answers wrong than actually existed. A staple of school comedies that don't take themselves particularly seriously. An inversion of Rank Inflation. Contrast The B Grade and compare Grade System Snark. When it's a reviewer doing this, it's Broke the Rating Scale.

Not to Be Confused with the tell-tale sign of an incoming Atomic F-Bomb, although this trope can often lead to that trope as a reaction when students get an F— (or other grade covered by this trope).

open/close all folders
Audio Plays
Comic Strips
Films — Live-Action
Jokes
Literature
Live-Action TV
Music
Puppet Shows
Theme Parks
Video Games
Web Animation
Web Comics
Web Original
Western Animation
Real Life
Different countries have different ways of grading, but many of them will have more than one level of "failing".
"You browsed TV Tropes all day every day instead of doing your assignment? Well, I give your assignment an F minus minus minus!"
Feedback

Timmy takes F to a new level and Mr. Crocker gives him a Super F.

Timmy takes F to a new level and Mr. Crocker gives him a Super F.