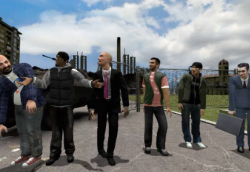 The plot consists of the overly random antics that occur at the new high school that Elliot (the main character) attends, along with his band of misfits that constitute his friends, and each episodes plot goes from Kitty0706's unique take on the everyday rituals of the American education system, from field trips to Mondays. Although there have been episodes that haven't been based entirely within the school or not called "Elliot Goes to School" (namely 'Elliot Goes Camping'), they are still canon to the overall plot.

The series ran for five episodes from 2009 to 2012 with fair distance between their release dates. After the fifth episode, "Elliot Goes Camping", was released, the series saw a 3-year hiatus. Unfortunately, this episode turned out to be the last one that Kitty0706 would ever produce, since in January 2015 he would die after a long battle with leukemia.

and was made by the late kitty0706