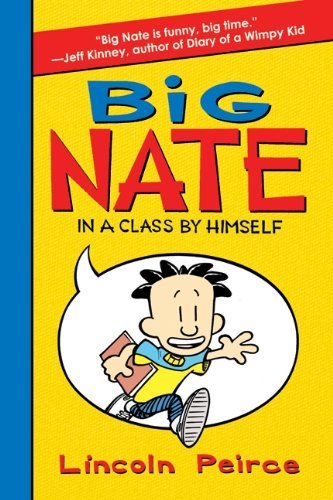 The very first book in the series. Nate still can't resist hogging the cover.
"The point is, I want to use my talents for more than just memorizing useless facts. I'm meant for bigger things. I am... destined for greatness!"
— Nate
Advertisement:

The Big Nate chapter books are a book series by Lincoln Pierce based on the comic strip of the same name. The first one, Big Nate: In a Class by Himself, was published in 2010 by HarperCollins Publishers. Books 1-6 were published by this same company, while the last two books were published by Balzer + Bray.

The books contain further adventures of Nate and his friends Francis, Teddy, Chad, and Dee Dee in a blended comic strip/text format. Eight books in the series have been published, which are as follows:

So far no more books have been planned for the series. Internet rumors of supposed 9th and 10th books generally have no basis in Word of God.

On February 19, 2020, it was announced that Nickelodeon had greenlit

an Animated Adaptation based on the series. In December 2021 it was announced that the series would instead premiere on Paramount+ on February 17, 2022.

These tropes are destined for greatness!