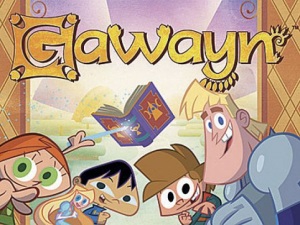 "Once upon a time there was a beautiful Princess who was to be queen..."
Duke: Yeah, right!
Advertisement:

Gawayn is a Zany Cartoon in which Princess Gwendolyn is about to be crowned queen before the villainous Duke decides to interrupt, placing a curse upon her which shrinks her down to size... Literally! In order to reverse this curse and regain her lost kingdom (now in the hands of the Duke), she must go on a quest to find the crystal of Gawayn. Accompanying her along the way is knight Sir Roderick, William the young knight-in-training, his sister and sorceress Inept Mage Elspeth, and Xiao Long, skilful in the area of martial arts. Together they set off, experiencing all kinds of adventures, obstacles and setbacks on their journey, meanwhile the Duke and his snarky companion Rex frantically try to stop them using one outrageous scheme after another.