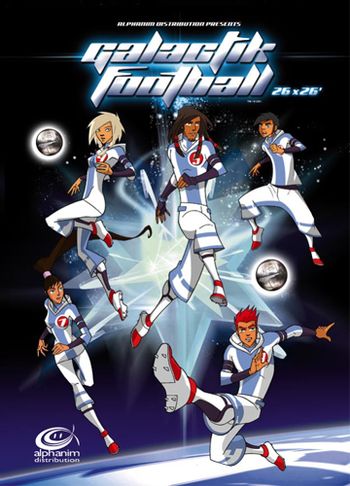 "On every planet in the galaxy you'll find the Flux, a powerful, magical energy. Here on Akillian we call it the Breath. The Flux is so strong that it had to be banned, except in Galactik Football, the most spectacular sport in the universe. But fifteen years ago a mysterious explosion rocked Akillian, swept the Breath away and destroyed our chances in the Galactik Football Cup. Fifteen years without a decent team and nothing but snow and ice. Now, hope lives again. Young, new players to revive the Breath of Akillian. Our fate is in their hands.
— Aarch, opening credits
Advertisement:

Galactik (sic) Football, is a French produced animated series that mixes conventional 2D animation with 3D motion-capture. Think The Mighty Ducks in space, but not Mighty Ducks: The Animated Series in space.

The story centres around a group of misfit teenagers recruited by veteran footballer Aarch, to play in the Galactik Football Cup. His new team, The Snow Kids, must face off against a host of magically endowed alien teams and more teen angst than you can shake a stick at if they are to have any hope of advancing in the competition.

Notable because while the team is often surrounded by intergalactic conspiracy, corporate evil and the occasional off-screen genocide, the Snow Kids are usually mostly unaware of the grand space opera brewing around them and are more concerned with team squabbles and perfecting their dribbling then they are with the evil conspiracy out to get them.

A third season premiered in Summer 2010.

This Show Contains Examples Of: