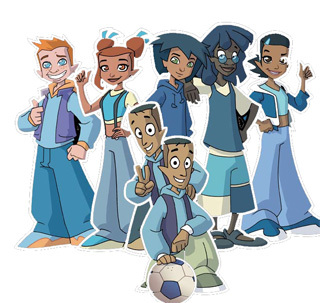 The ensemble as of Season 3. From left to right: Jeremy, Eloise, Tek, No, Tag, Gabriel and Samira.
Advertisement:

A French Television show which aired on France 3, Foot 2 Rue (Street Football in English and Futbol Callejero in Spanish) is based on the book, La Compagnia dei Celestini by Italian author Stefano Benni and adapted by French animator, Steven Roux of French Bulldog Studios. Originally, five seasons were planned, but only the first three were released, with the final episode acting as a form of epilogue, though there is a Sequel Series. However, the series returned for its fourth season in February 2022, this focusing on supporting character "Li'l Dragon" Wong as he seeks to build a new team for World Cup contention.

Unlike La Compagnia dei Celestini, Foot 2 Rue takes place in Port-Marie, a thinly-veiled representation of Marseille. The kids of Port Marie organize a Street Football World Cup with the help of a former professional footballer, thus attracting players from all around the world and becoming famous worldwide in the process. The sport itself consists of a stripped down version of soccer, meant to be accessible to all children regardless of money and social status and in any location.

The first three seasons of Foot 2 Rue follow the adventures of ''The Rifflers'' a.k.a. "Les Blues de Port Marie". Five of them attend the Riffler Institute in Port Marie:

In the fourth season, most of the original team has left Port Marie for one reason or another. "Li'l Dragon" Wong, a long time admirer of them, decides to form a new generation of Blues to pursue his own Street Football ambitions, with four of them living at the Riffler Institute:

The first three seasons of this series were previously found in English on Netflix, under the alternate name of Street Football, but have been removed as of June 2016.

In addition, a part Sequel Series, part Spiritual Successor All-CGI Cartoon titled "Foot 2 Rue Extreme" (also known as "Extreme Football") began broadcasting in 2014. This series sees an almost 100% new cast of characters who work in teams of five that uses a new style of the sport called, well, Extreme Football. Tag, who, along with his once thought Disappeared Dad, now lives with his new blended family, comes to mentor main character and new step-brother Samy and his friends on their Extreme Football endeavors.