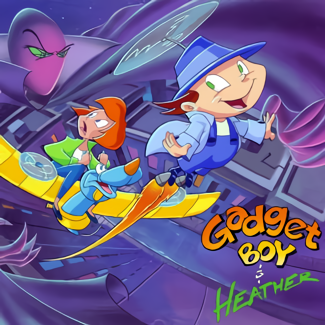 Wow, he always had a propeller there!
Advertisement:

One of the first short-lived spin off of Inspector Gadget, which features the adventures of a kid version of the bumbling inspector known as Gadget Boy.

Along with his assistant/nanny Agent Heather, and his robotic dog G9, they fight crime and save the world from the evil villainess Spydra.

This series, created by DiC, premiered in 1995, part of Bohbot Entertainment's Amazin' Adventures 2 syndicated block, and later aired on Toon Disney until around 2001. Season 2 retooled the show into an educational series entitled Gadget Boy's Adventures in History; this aired on The History Channel in 1997.