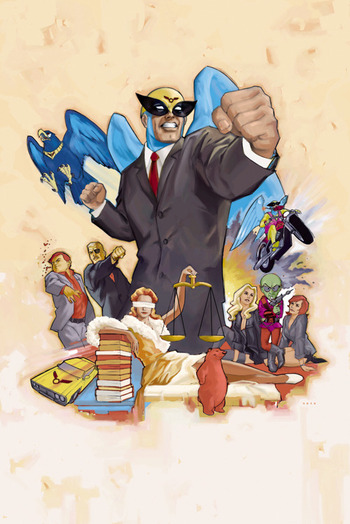 The series follows the adventures of Harvey Birdman (Cole), now an attorney at a law firm run by his former boss, Phil Ken Sebben (Colbert) and other Hanna-Barbera characters (most notably Peter Potamus) as well as Birdman's sidekick Birdboy, now called "Peanut", who was now an ultra-competent sociopath). Their clients, in their cases, are mainly their fellow Hanna-Barbera characters, in cases that tend to address longstanding fanon theories about them (like Race Bannon and Doctor Quest being lovers, or Scooby-Doo and Shaggy being stoners). Most of Birdman's enemies from his '60s-era show turn up as opposing lawyers or even judges, most notably Large Ham Mentok the Mind Taker (John Michael Higgins) as judge and Myron Reducto (Colbert again), who turns into a frenemy of Birdman before his untimely death.

The show was arguably the break-out hit of the original batch of Adult Swim shows that debuted in 2001, but suffered mightily after the initial six episode run. The series fell victim to a massive case of Schedule Slip with huge gap between airings and only 2-3 episodes airing within a single year. The series retooled itself after the first season as well, becoming a workplace comedy instead of a law show, with the cases taking the backseat to the antics of the law firm itself. Particularly those of Phil Ken Sebben and his wacky schemes, which almost all involved humiliating and tormenting Harvey. Birdgirl (Paget Brewster) was also introduced (as Phil's daughter Judy) as Birdman's unwanted female sidekick, who while competent in the courtroom, almost married her father due to her slavish devotion to the old school rules about never revealing one's secret identity.

The reformat ultimately backfired on the show, when Colbert, whose characters were now front and center and drove most of the show's plots, suddenly dropped the show to focus full-time on The Colbert Report. This meant getting rid of Reducto and Phil Ken Sebben, who, despite being fan favorites, were ultimately killed. In the end, the show was finally cancelled. Though at the least given enough lead time so the writers could close it out properly (even getting Stephen Colbert to reprise his roles ironically).

The series received little merchandise from Adult Swim, which included figures of Sebben and the giant bear. On January 8, 2008, a game for the PlayStation 2, PlayStation Portable and Wii was also created by Capcom, which used the Phoenix Wright: Ace Attorney game engine and had five new cases. While it got mixed reviews, its biggest criticism was being the absence of Colbert and his voice double, which forced Capcom to cast a replacement voice.

No relation to the 2014 Michael Keaton film Birdman or (The Unexpected Virtue of Ignorance), although the joke's been made

. Or another bird-themed attorney with his own accomplishments.

In 2018 it was announced that the series would be having a half-hour special titled Harvey Birdman: Attorney General, which premiered at midnight on October 15, 2018. A Preview

In 2019, it was announced that a spin-off (and Stealth Sequel) show is being produced and centers on Birdgirl in Birdgirl. The show aired its first episode on April 2021.