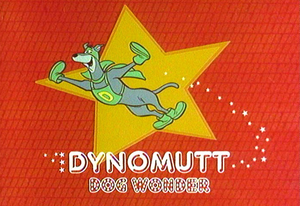 Before The Tick, Freakazoid!, and The Mask, there was this animated Affectionate Parody of superheroes.

Dynomutt is a friendly "Robot Dog", voiced by Frank Welker, with special robotic superpowers — but his "carelessness" is only slightly better than that of Inspector Gadget (whom he predated by seven years; six if one counts the 1982 pilot). He and his straight-arrow Super Hero master, the Blue Falcon (no, not that one), fought crime and patrolled the city of Big City in the Falconcar, which usually flew but sometimes hovered closer to the ground.

Like Batman, the Blue Falcon had a variety of tools in his Utility Belt. He addressed Dynomutt as "Dog Wonder" or "Dog Blunder" as circumstances warranted. Circumstances could warrant either, frequently. Dynomutt was usually the one to fix the messes and catch the villains, but he always managed to make things worse first.

This dynamic duo debuted in 1976 on ABC as part of The Scooby-Doo/Dynomutt Hour. They were Scooby's teammates in the Laff-A-Lympics.

In the film, SCOOB!, Dynomutt and Blue Falcon are major characters, but their positions are completely reversed. The Falcon is the rather dim son of the original Blue Falcon, and Dynomutt has been seriously upgraded in his intelligence to become his sarcastic Hypercompetent Sidekick.

Later parodies of this series provides examples of: