Tabletop Game / Dogs in the Vineyard 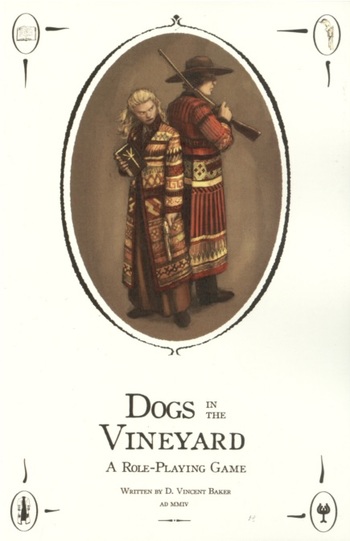 Do the wicked deserve judgement? Does the sinner deserve mercy? They're in your hands.
— Back cover copy
Advertisement:

Dogs in the Vineyard is a Tabletop RPG by D. Vincent Baker, who is also responsible for the games kill puppies for satan and Poison'd, as well as Apocalypse World. According to The Other Wiki, it won Indie RPG of the Year and Most Innovative Game in the Indie RPG Awards of 2004, and in 2005 it was nominated for a Diana Jones Award for Excellence in Gaming.

It can be described as a Western, set in a Fantasy Counterpart Culture to the Mormon-settled Deseret Territory of early Utah

. The Player Characters are holy gunslingers known as "God's Watchdogs" or just Dogs, riding a circuit among various towns and villages of the Faithful. The Faithful believe in a controversial religion known as The Faith, properly The Faith in All Things in the King of Life, and heavily based on the historical beginnings of the Church of Jesus Christ of Latter-day Saints.

Adhering to The Faith offers real, though somewhat intangible, protections from Demons. Therefore, if one of the Faithful sins, it's a major problem for the community at large; the town begins to slide towards sin, hatred and murder. The Dogs are sent in as preventive medicine, damage control and, of course, Exorcists.

The thing about this game is that much of the doctrine of The Faith is deliberately left undefined. This means that the players invent most of the doctrine, and have authority as wandering prophets to reinvent and revise it. The Game Master is explicitly forbidden by the rules to second-guess the player's judgment: Only the players can do that, by gaining Fallout in the course of their struggles.

Notable for having a system where your character's opinion could change as the result of an extended conflict, typically when you gain Fallout.

Compare Sorcerer (2001) and My Life with Master