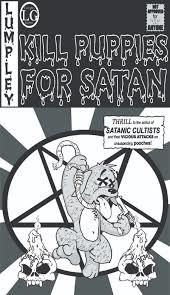 kill puppies for satan (stylized as all lowercase, because Satan can't afford capital letters) is an indie role-playing game published by Lumpley Games, where players are not just encouraged but required to play a Stupid Evil Goldfish Poop Gang of Hollywood Satanists who fuel their magic powers by ...guess.

While the original game was intended as nothing more than a parody, and, in the author's own words, a giant "Fuck you!" to the tide of Evil Versus Evil, '90s Anti-Hero-filled games inspired by Vampire: The Masquerade, to the point it was never even play-tested, its blissfully simple and story-focused mechanics were actually quite innovative. This alone probably wouldn't have enticed many role-players into trying such an ... uninhibited ... game, were it not for the gamebook's truly inimitable Lemony Narrator, who explains his awful world in a breathless yet hilariously matter-of-fact rant.