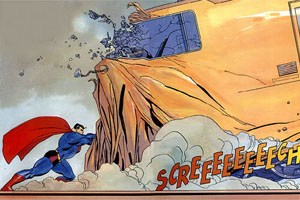 More powerful than a locomotive.
"If a train traveling at 250 miles per hour is stopped dead, the passengers will continue to travel at that speed (that is, double their terminal velocity). In other words, unless you stop the train slowly, they will have more chance of surviving if you had dropped them out of an airplane without a parachute. A safe stopping distance is several miles."
— The Superhero Handbook by Michael Powell
Advertisement:

It's up to a Superhero to stop it!

This trope is usually used because it doesn't need a supervillain (although sometimes one does exist to derail the train). It shows, thus, that the superhero does more than just fight useless battles against supervillains, actually providing a visible good to society outside of his own rivalries.

In addition, it allows the hero to showcase his Super Strength or Nigh-Invulnerability, and to save the lives of innocent people. It's also a good method of comparing heroes' relative power levels or gimmicks/gadgets. Superman just holds the train until it stops, while Spider-Man has to use webs attached to lampposts. So, stopping the train is almost like a graduation for a super hero. A bit like The Worf Effect, except Worf is a train. You're a nobody unless you can stop a large moving vehicle.

Used more in The Golden Age of Comic Books, when trains were a popular means of transportation in the US (where most Superhero stories come from), but still alive today. One could put on a tinfoil hat to mention that, if not for the supers, there would be a lot of train crashes, and it seems the train regulation committee forgot OSHA Compliance when they noticed some dude in a cape always appeared to save the passengers. For more modern takes on the trope, a crashing airplane or re-entering spacecraft work just as well.

Oh, also, sometimes there's just a hole in the bridge for the hero to fix. He'll usually put himself between the extremities and "act" as the missing rails.

See also Chained to a Railway, Railroad Tracks of Doom, Pedestrian Crushes Car, & Superhero. Do not confuse with Trainspotting, which, yes, this trope's name is a pun off of.

One of the many methods for Cutting the Knot, as noted on the page.