Recap / Batman: The Animated Series E2 "Christmas with the Joker" 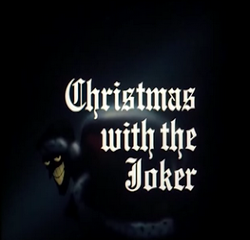 It's a snowy Christmas Eve in Gotham City and all the people are getting into the holiday spirit, including the residents of Arkham Asylum. Made to sing "Jingle Bells" as they decorate an enormous Christmas tree, The Joker (gleefully serenading us with a very special version of the song) is given the golden bell to perch atop the tree. However, the tree is in fact a rocket and no sooner does the Joker climb the tree than it takes off and blows through the roof, taking the Clown Prince of Crime to freedom.

Joker: Jingle Bells, Batman smells, Robin laid an egg! The Batmobile lost a wheel, and the Joker got away!
Crashing through the roof, in a one-horse open tree, busting out I go, laughing all the wheeeeeee! Ha ha ha ha!

One man isn't in the Christmas spirit, however: Batman. Back at Wayne Manor, Dick Grayson tries to talk Batman into letting up for just one night and kicking back to watch It's a Wonderful Life, but the Dark Knight's primary concern is that Joker is on the loose again. While Robin assumes that even the Joker wouldn't make his move on Christmas, Batman suspects otherwise: unlike the rest of Gotham's scum, Joker has no family to spend the holidays with. The Batmobile roars off into the snowy winter night as the Dynamic Duo begin their sweep of the city.

And... all is well. Musicians are playing Christmas songs in the streets as last-minute shoppers, ice-skaters and charity fundraisers all revel in the most wonderful time of the year. Even people who look like muggers have suddenly became friendly, generous people who run after old ladies who have left behind gifts for their grandchildren. Robin's protests that they aren't needed tonight still fall on deaf ears, of course. Even back at Wayne Manor before Christmas dinner, Bruce Wayne is still certain that he should have done one more sweep of the city. Nevertheless, Dick coaxes Bruce into finally sitting down to watch It's a Wonderful Life.

But their movie isn't on the right channel—or any channel. Every single channel is broadcasting the same images of a man standing beside a warm fire, bathed in shadow: the Joker. After leaping back into costume, Batman tracks the Joker's broadcast signal while the deranged clown reveals that, not having a family to share Christmas with, he has decided to steal the "Awful Lawful Family": Commissioner Gordon (Daddy Lawful), Summer Gleeson (Mommy Lawful) and Harvey Bullock (Baby Lawful) are all tied up and gagged with candy canes. If Batman can't find them by midnight, Joker threatens to kill them.

Joker also has a hand puppet, through which he reveals the next stage in his plan: blowing up the President's Bridge, part of a railway route, and sending the 11:30 train and its passengers straight into a gorge.

Summer: My mother's on that train!
Joker: Your mother? Well, that's different then!
Joker: [via puppet] Yeah—it'll be even more exciting when it crashes! Ha ha ha!

Batman and Robin catch up to the train. As the Boy Wonder disconnects the passenger cars from the rest of the train, Batman makes his way to the front carriage to save the engineer. Getting there just in time, Batman and the train driver jump to safety as the train flies off the destroyed bridge in an almighty explosion.

With time running short, Batman and Robin quickly race to the source of the Joker's broadcast signal at the observatory on Mount Gotham. Joker has left them a few surprises though, including a telescope that has been reconstructed into a fully operational cannon. As Batman draws its fire, the cannon hits a nearby control tower, promptly going out of control and beginning to fire shots wildly and randomly into Gotham City.

Inside the observatory, Robin finds himself face-to-face with six giggling, machine-gun-wielding Joker robots. Using their position to trick them into firing into each other, five are quickly dispatched. While under fire from the last robot, Robin throws a bomb at the mechanisms that make the cannon operate, stopping it from firing.

With just minutes to go until midnight, the Dynamic Duo is completely out of leads. Thankfully, Joker throws them a helping hand when he gives "Mommy Lawful" her present—a wind-up Betty Blooper doll, which he promptly uses to destroy a model version of Gotham City for kicks. This is all the lead that Batman and Robin require, however, and they immediately trace the origin of the rare doll to the abandoned LaffCo Toy Factory downtown.

They guessed correctly and found the Joker's hideout. Joker, of course, has a few more surprises to throw at them and activates his army of toys, including flying toy planes and giant tin soldiers (all with the Joker's face). After knocking down the giant soldiers, Batman gets to work on the flying attackers with a bat.

Robin: They don't call you "Batman" for nothing!

Resorting to far more traditional tactics, the Joker's two goons open fire with machine guns and send Batman and Robin ducking for cover. Batman wraps his cape around a giant teddy bear, using it to draw their fire before the bear falls on them, pinning them to the ground. It's only then that the Joker reveals himself from behind a giant green curtain, where the three hostages are hanging precariously over a vat of bubbling, molten plastic while Joker stands beside their rope with a pair of scissors, threatening to drop them into the vat if Batman doesn't open the Christmas present he has for him.

Being out of options, Batman receives the Joker's present and tears off the bow and wrapping, and opens the box to reveal... a cream pie that springs itself into his face. The gag sends Joker into a fit of hysterics before he quickly cuts the rope and makes a run for it.

Batman leaps bravely to save the hostages and grabs them in the nick of time. He then chases the fleeing Joker and manages to get a hold of him. Joker, however, is in fact wearing a fake jacket that slides off when his arms are grabbed and, after squirming free, he makes his way up onto the walkway above the vat of boiling liquid. But he steps on a very fortunately placed roller skate and tumbles over the railing, almost falling into the vat before Batman grabs his leg. Batman then smiles and bids the Joker a Merry Christmas. The Joker answers with "Bah! Humbug!"

Bruce and Dick finally get to see It's a Wonderful Life (Gordon loaned them his copy of the tape) back at Wayne Manor, and even Bruce is in a far more cheerful mood now that Joker is behind bars. The episode ends with the Joker in his dark cell, cackling madly while singing "Deck the Halls".