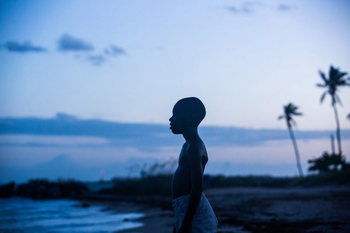 In color theory, blue is primarily associated with calmness, peace, and serenity. It reminds us of the open sky and waters, which in turn bring to mind steadiness and restfulness.

A story can utilize this association in many ways. A character or group associated with peace may wear blue to represent their ideals or the group's Mellow Fellow is strongly associated with the color. A quiet scene can be lit with the color blue or a place intended to be relaxing can prominently feature the color. Another common way is to pair this trope with Water Is Blue, since water has similar associations with calmness and serenity — someone associated with water thus has a calm personality.

Compare Heavenly Blue, which pairs the divine with the color blue, and True Blue Femininity, where women (who were historically expected to be cool-headed and down-to-earth compared to men) wear blue. Also compare Blue Means Cold, which has a similar connotation since the cold itself is associated with calm, silence, and loneliness. Tropes like Icy Blue Eyes may fall into both. See also Blue Tropes. When blue represents melancholy/sadness in addition to calmness, see Color-Coded Emotions.

Contrast Red Is Violent and Vibrant Orange. This trope is a big reason Red Oni, Blue Oni is named so; a calm/stoic blue character might be paired with an energetic warm-colored character: for example, the Hot-Blooded hero and the cool-headed lancer.