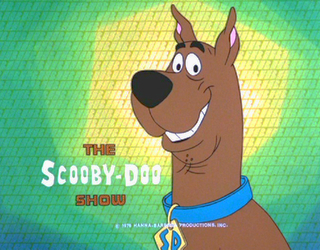 While Scooby-Doo is running from a spooky ghost.
Shaggy is-a doing what he does the most.
Hey! Come on get involved till the mystery is solved.
Hang around for Scooby-Doo.
— Syndicated theme song excerpt
Advertisement:

The Scooby-Doo Show is a popular sequel animated television series created by Hanna-Barbera. This is the second spinoff of Scooby-Doo, Where Are You!; this returned the show to half-hour mysteries without weekly guest stars.

This show's history is a turbulent one: It was shifted into block shows throughout the 1970s, but since then the 1976–78 episodes, originally paired with Dynomutt, Dog Wonder, have been known as The Scooby-Doo Show.

Thematically, the show's evolution is summed up with the fact that this is the first show to work in Scooby's relatives. Scooby-Dum appears in four episodes and Scooby-Dee in one. Also carrying on from the previous series, The New Scooby-Doo Movies, the gang travels a lot more around the world than the more basic local adventures of the first incarnation.

The Scooby Doo Show provides examples of the following Tropes: